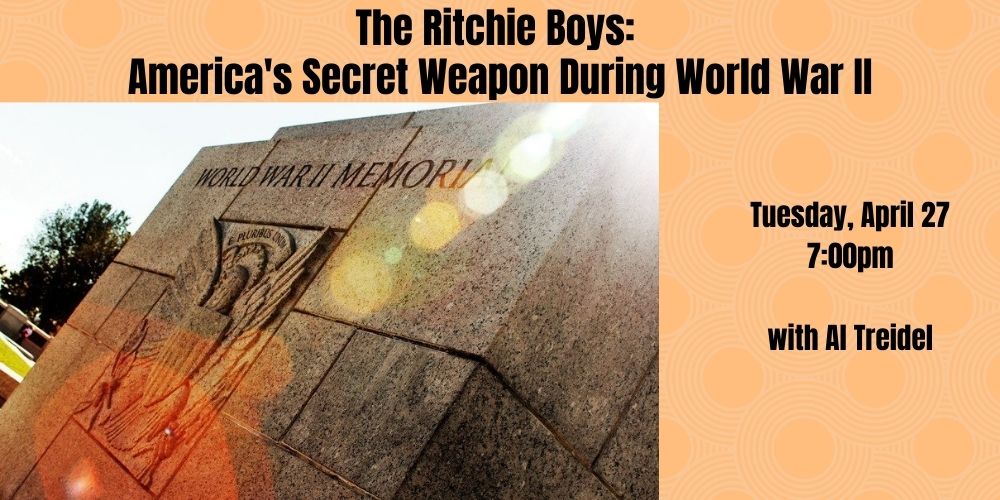 The Ritchie Boys with Al Treidel

In late 1942, the US Army decided to create a special program to make use of recently arrived Jewish immigrants’ familiarity with Germany and its language. Approximately 2,000 young Jewish men (primarily from Germany) were recruited to train at Fort Ritchie in Maryland in interrogation and counter-intelligence techniques. Most of these young men had left their families behind in Europe and were anxious to become an important part of the defeat of the Nazis. Taking their lives into their own hands, the “Ritchie Boys” provided roughly 2/3 of the human intelligence used in the fight against the Nazis. Their work saved hundreds of thousands of lives and may have actually shortened the war.

Inasmuch as they were directed not to share information about their training and exploits during the war, only recently have we learned about these special individuals. Their military records were expunged, and their existence was considered to be classified information. Most did not even tell their families about their role in the war. Hear about these amazing young Jews and some of their stories from the son of one of the Ritchie Boys.

Al Treidel has enjoyed a 50-year career as a public-school administrator and teacher on all levels of public education and at the university level instructing both undergraduate and graduate students. For the final 10 years of his career, Mr. Treidel served as a turnaround specialist for struggling schools. Al has received a number of prestigious awards and recognitions including the Solomon Schechter Award in 2017. Al and his wife Ann divide their time between their homes in Fairfield, Connecticut and Sarasota, Florida. They have three daughters and four grandchildren.

Only recently did Al discover that his father was one of the Ritchie Boys through clues and fragments of stories that were passed down. Join us for what promises to be a fascinating account on this brave and resourceful young Jewish men through whose efforts actually helped to bring down the Third Reich.

Please join us on Zoom.

Follow the ID # with the pound sign and then, when asked for a participant ID, just press pound.

For all others, please fill out this form

This program is free, but donations are always welcome! Click here or the red button at the top of the page to donate.