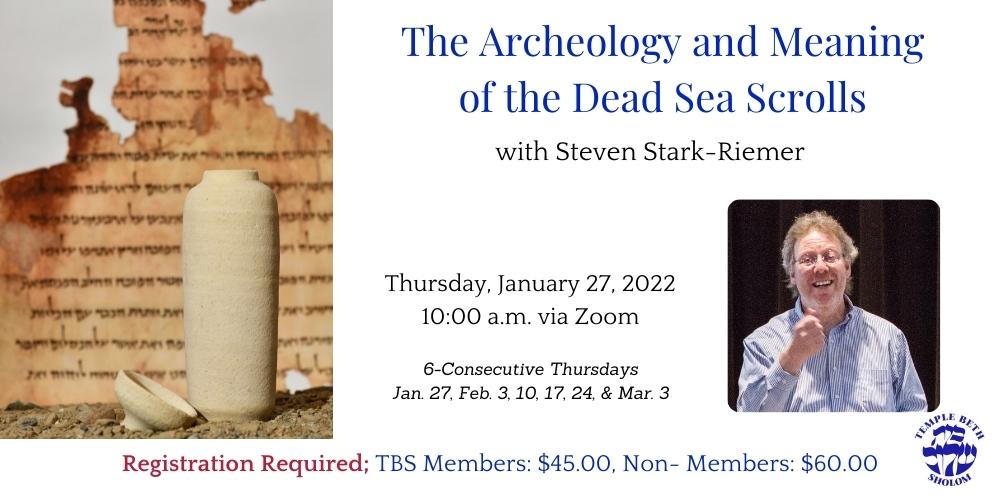 Archeological enthusiast, Steven Stark-Riemer will be presenting another exciting archeology series for 6 consecutive Thursdays at 10:00 am beginning January 27 through March 3. You can enjoy this series in the comfort of your home or in another location via Zoom.

This six-session program will feature a weekly presentation, discussion, and handouts. The Dead Sea Scrolls are the most important collection of Jewish texts from the Second Temple Period centuries and before the rise of Christianity, and many scholars have described them as perhaps the most important archaeological discovery of the 20th century. In the early years, following their discovery near the ancient site of Qumran, on the western shore of the Dead Sea, the Scrolls were hailed as virtually a primary source for the development of Christianity. Recently, however, and especially since their full publication in the 1990’s, scholars have increasingly learned that it is only through efforts to understand what the Dead Sea Scrolls can teach us about the history of Christianity, because Early Christianity came into being only after these texts were composed and copied.

Zoom links will distributed prior to the program, registration is for the SERIES not per class.