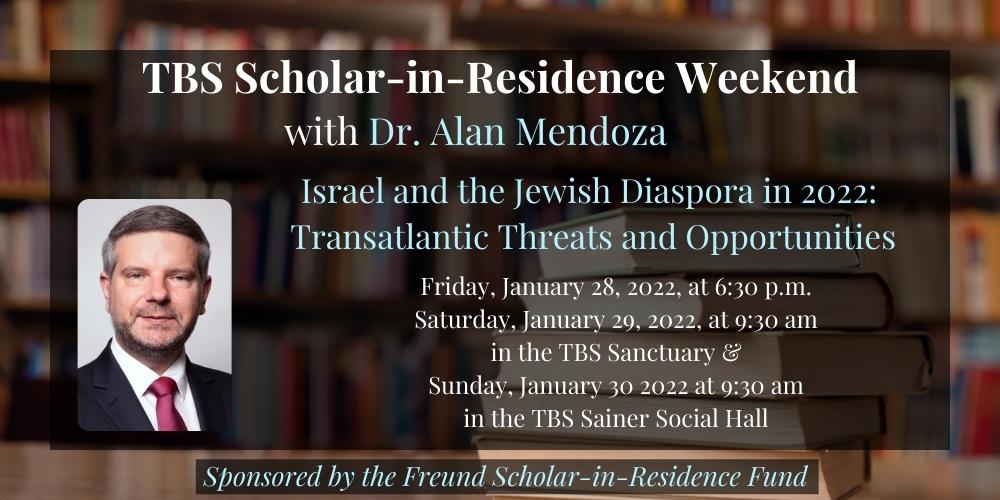 In the TBS Sanctuary

In the TBS Sainer Social Hall

Sponsored by the Freund Scholar-in-Residence Fund

Alan Mendoza is a Co-Founder and Executive Director of The Henry Jackson Society (www.henryjacksonsociety.org), Britain’s leading thinktank fighting for the principles and alliances which keep societies free. He directs strategy for the organisation as well as acting as its main public face in mediums as diverse as the BBC, Sky, CNBC, Al-Jazeera, CNN, Fox News, GB News, Bloomberg, LBC and TalkRadio. On the print side, Alan is a columnist for City AM, London’s business newspaper, and has contributed to The Times, The Telegraph, The Daily Mail, The Sun and a host of international newspapers and magazines. He is also the former host of Current Affairs on the J-TV news channel, where he has held controversial figures like former Mayor of London Ken Livingstone, Baroness Tonge and Professor Norman Finkelstein to account for their views on Israel and Jews.

Having obtained a B.A. (Hons.) and M.Phil in history at Gonville and Caius College, Cambridge, Alan completed a Ph.D. at the same institution. He is a Fellow of the Royal Society of Arts and was the Parliamentary Candidate for the Conservative Party in the Brent Central Constituency for the 2015 General Election. He is also Vice-Chairman of JNF (UK), Director of the Israel-Diaspora Trust, a non-aligned political salon in London educating about Israel and Diaspora issues, and a Trustee of the Bevis Marks Synagogue Heritage Foundation (the UK’s oldest synagogue, with Patron HRH The Prince of Wales) and The President Reagan Memorial Fund Trust.