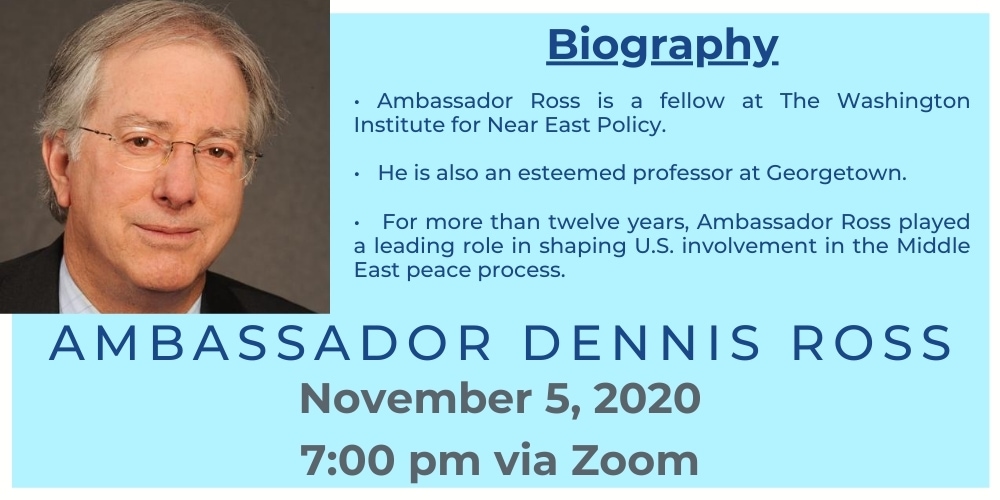 Ambassador Dennis Ross will address Temple Beth Sholom members along with the Sarasota/Manatee Jewish community just two days after the U.S. Presidential Election. The Middle East is in a constant state of change. Ambassador Ross will analyze current events in the Middle East and will discuss what to expect from the next U.S. Administration. This program is presented by Temple Beth Sholom in conjunction with Jewish Federation of Sarasota/Manatee through the generosity of Deborah and Lawrence Haspel. There is no charge for this event, but all participants are required to register in advance no later than Tuesday, November 3 by 4:00 pm.

Space is limited and if the maximum is reached prior to November 3, then registration will be closed early. TBS members are encouraged to register early for what promises to be an amazing evening.

Ambassador Ross is counselor and William Davidson Distinguished Fellow at The Washington Institute for Near East Policy. He is also Distinguished Professor of the Practice of Diplomacy at Georgetown University. For more than twelve years, Ambassador Ross played a leading role in shaping U.S. involvement in the Middle East peace process, dealing directly with the parties as the U.S. point man on the peace process in both the George H. W. Bush and Bill Clinton administrations. He served two years as special assistant to President Obama and National Security Council senior director for the Central Region, and a year as special advisor to Secretary of State Hillary Rodham Clinton.

Ambassador Ross is the author of five books on the peace process, the Middle East, and international relations, most recently “Be Strong and of Good Courage: How Israel's Most Important Leaders Shaped Its Destiny” (Public Affairs, 2019), written with his colleague David Makovsky, which was published in September 2019.

This program is free through the generosity of the Haspels, but donations are always welcome! Click here or the red button at the top of the page to donate.