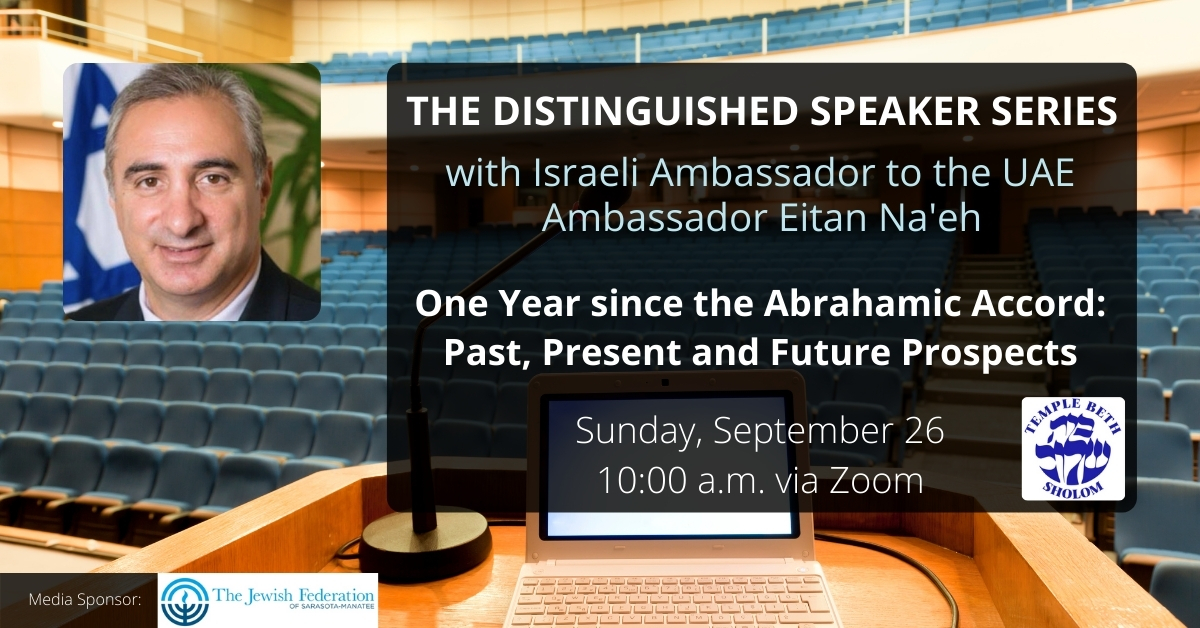 THE DISTINGUISHED SPEAKER SERIES with Israeli Ambassador to the UAE Ambassador Eitan Na'eh, One year since the Abrahamic Accord: Past, Present and Future Prospects

We are delighted to announce a brand-new series at TBS titled The Distinguished Speakers Series. Each month we will feature an outstanding speaker from a different background from around the world . These programs will take place via Zoom and will be free to the public. On Sunday, September 26 at 10:00 am, TBS will welcome Eitan Na’eh, Israeli’s first Ambassador to the United Arab Emirates. This program will take place as a webinar and will require all attendees to register in order to obtain the webinar link. The deadline for registering is Friday, September 24. By 11:00 am.

Israel and the UAE signed the historic Abrahamic Accords normalization agreement at the White House on September 15, 2020. Israel has also normalized relations with Bahrain, Morocco and Sudan heralding in a new era of Arab Israeli cooperation. Since the UAE and Israel formalized ties, tens of thousands of Israeli tourists have flocked to the UAE and hundreds of millions of dollars in trade has already occurred. The two countries have signed dozens of agreements in more than 15 different sectors.

Born in Israel in 1963, Ambassador Na’eh studied Middle Eastern History and political science at Tel Aviv University. Shortly after completion of his degree, Na’eh joined the Foreign Office in August 1991. Na’eh served in Turkey as Second and later First Secretary (1993-1997) and in Chicago as Deputy Council General. He was then appointed Ambassador to Azerbaijan (2001-2005) and later served as an Deputy Director of the National Security Council and as Senior Director of the Diplomatic Secretariat (2009-2013) at the Prime Minister’s Office. From 2013-2016, he served as Head of the Mission and Charg e d”Affairs in London. In 2016, he was appointed Ambassador to Turkey and served in that position until 2018 was asked to leave in following American recognition of Jerusalem as Israel’s capital and clashes occurred along the border with Gaza. Last December, Na’eh was appointed Head of the Israeli Mission to Abu Dhabi and is now Israel’s first Ambassador to the United Arab Emirates. Ambassador Na’eh is married with two children.

Al Treidel, Chairman of TBE’s Program and Education Committee credits this new and innovative series to our new Rabbi Stuart Altshuler. “His many contacts with accomplished individuals from so many different walks of life will serve to enrich the entire Sarasota Jewish Community with outstanding presentations on a monthly basis. We are so very lucky to have such an incredible religious leader here at TBS.” Future speakers will be author Thomas Harding who wrote Hans and Rudolf: The German Jew and the Hunt for the Kommandant of Auschwitz, Austrian Ambassador Christoph Weidinger and Biblical scholar John Barton. For more information on this series, contact Kelly Nester at TBE at 941-955-8121.

This event is at no charge, but registration is REQUIRED.