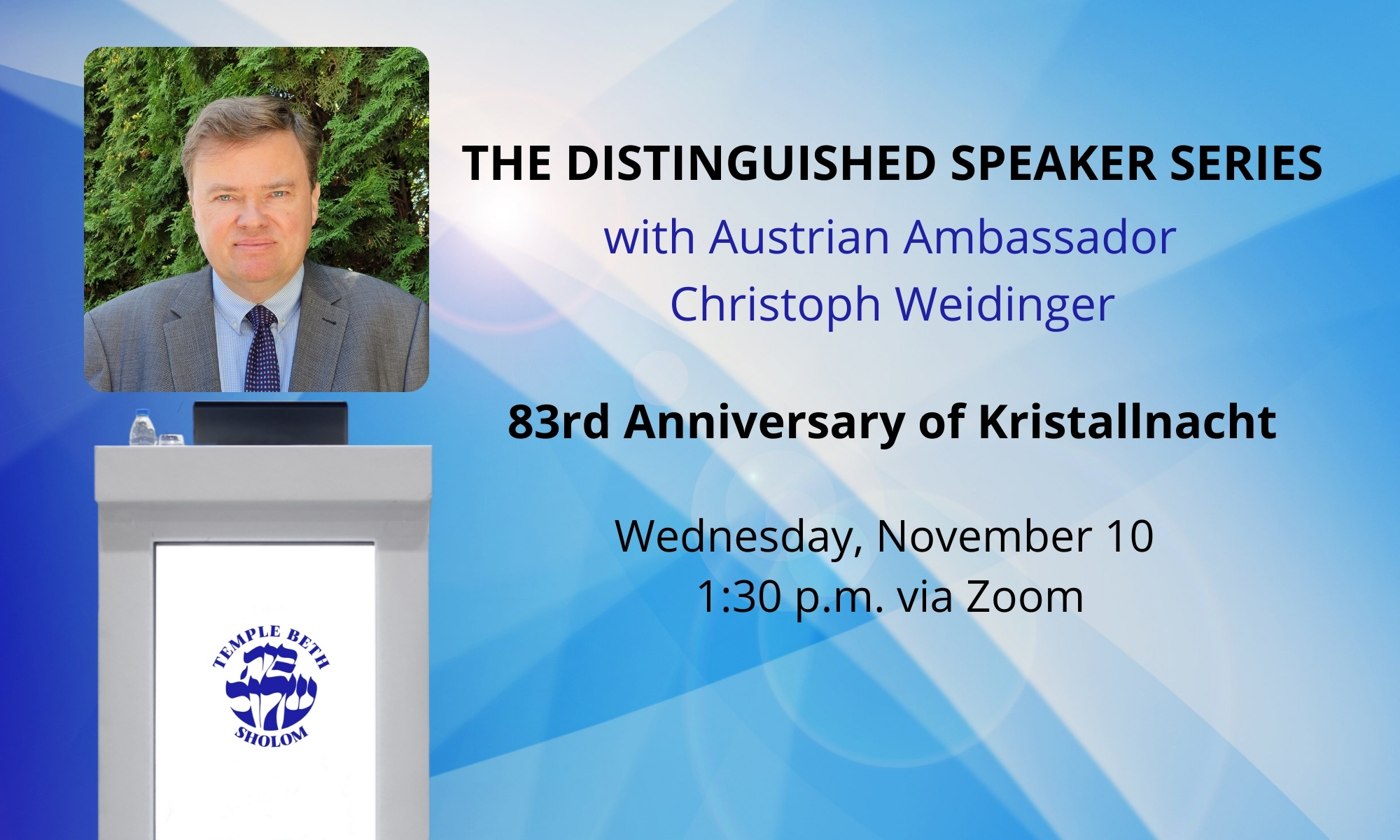 THE DISTINGUISHED SPEAKER SERIES with Austria's Ambassador Christoph Weidinger, To Speak on the 83rd Anniversary of Kristallnacht

Temple Beth Sholom’s Distinguished Speakers Series continues on Wednesday, November 10 at 1:30 pm with Austrian Ambassador Christoph Weidinger via Zoom. Weidinger is a true friend of the Jewish Community, and it is appropriate that he address the Sarasota Jewish Community on the 83rd anniversary of Kristallnacht.

On November 10, 1938, Jewish homes, hospitals, and schools were ransacked as attackers demolished buildings with sledgehammers and burnt them to the ground. Rioters destroyed 267 synagogues throughout Germany, Austria, and the Sudetenland. Over 7000 Jewish businesses were damaged or destroyed, and 30,000 Jewish men were arrested and incarcerated in concentration camps. It was a night of burnings and beatings, of brutal assaults on defenseless and innocent people—estimates of fatalities caused by these attacks varied. Early reports estimated that 91 Jews had been murdered. Modern analysis of German scholarly sources places the figure much higher; when deaths from post-arrest maltreatment and subsequent suicides are included, the death toll reaches the hundreds. Deaths by suicide totaled no less than 638 people. Historians view Kristallnacht as a prelude to the Final Solution and the murder of six million Jews during the Holocaust.

Among his comments relating to his experience as a diplomat, Ambassador Weidinger will reflect on Austria’s role in the Holocaust and in understanding Kristallnacht and the horror of its history. He will speak about the effect that it has had on his own life and how it has impacted his actions as an Austrian diplomat. Ambassador Weidinger has enjoyed a long and special friendship with our own Rabbi Altshuler. He has played a unique role in the fight against antisemitism and Austria’s relationship with the State of Israel.

This presentation will not be recorded. Therefore, interested individuals should plan on attending this program in person. All Distinguished Speakers presentations are open to the entire Sarasota-Manatee Jewish Community. Attendees must register on the TBS website to secure the appropriate Zoom link in advance at www.templebethsholomfl.org/events. Registrations for this event end, November 8 by 11:00 a.m.