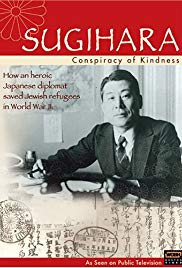 In the fall of 1939, Hitler’s murderous wave was sweeping through Eastern Europe. In the face of the Nazi onslaught, Japanese diplomat Chiune Sugihara set about saving thousands of lives. With no possible hope for reward and at great risk to his family and career, Sugihara, Japanese consul to Lithuania, defied Tokyo authorities by writing transit visas allowing Jewish families facing extermination to flee Europe to Japan and other countries.